They are fast, engaging, and reliable; but what exactly does it mean for users, businesses, and developers? What kind of benefits do they deliver to each of these groups, and which gives them the title of "the solution most suitable for the mobile-first era?" We clear that up below.

"Don't Make Me Think" wrote Steve Krug, a guru of usability, two decades ago, and in terms of UX, that principle hasn’t changed a bit. Digital users hate when they are forced to overcome obstacles in their path, and will sooner give up than spend even a minute waiting on a page to fully load. Mobile users, since they often use smartphones on the run, with a poor network connection or an expensive data plan, are the most impatient ones. But since their number is growing, especially in emerging (and promising) markets like Asia and Africa, businesses have to meet their expectations.

Progressive Web Apps - a fusion between the features of web pages and mobile apps - are one of the best ways to do that. The most significant benefits they offer are their speed, the ability to work off-line, and accessibility directly from the browser. People can add them to the Home Screen of their mobile device like a typical native app, skipping app marketplaces and saving valuable storage, especially on low-end devices. Users are now more likely to give a PWA a chance since, in the last few years, they have become quite reluctant to download new apps.

They treat their mobile devices like cameras, computers, notepads, assistants, and - most importantly - as a treasury of memories. If downloading an app means that they have to sacrifice precious photos or messages, they think three times before clicking "yes." 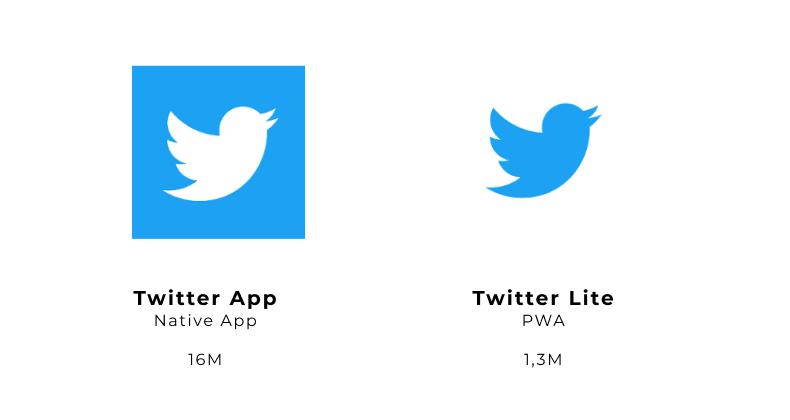 Progressive Web Apps do not force users to make such hard choices because they are much lighter than native apps. Moreover, users don't see the typical installation process. They click on a dedicated button, and a shortcut is created on the home screen. Of course, with downloaded content, PWAs also "steal" some space but still far less than a native app.

Benefits of PWAs for users:

Long story short, Progressive Web Apps have come about at just the right time, a time when mobile user behaviour has become more demanding, and discovering, downloading, and using a PWA is as simple as can be.

For businesses, convincing users to install an app locally is priceless. It can be used as a communication hub with clients and, by avoiding third parties, reduce both the financial effort of cooperation (with, e.g., an SMS operator or chatbot provider) and the risk of consumer data leakage or cyberfraud. A Progressive Web App is easy to update, whereas this process may take more time and effort on a traditional app marketplace., Thanks to these easy updates, home screen access, and notification features, having a PWA means that communication between a business and its customers will be smooth and effective. Additionally, a PWA, by providing superb UX, increases visitors' engagement, and conversion rates. Moreover, with faster loading times, a PWA reduces server load and minimizes the danger of a crash or slow-down during periods of intense traffic, like Black Friday.

The problem is, as we mentioned before, that customers, while they might appreciate an app's UX, are no longer willing to download them in large numbers. By now, every smartphone user has probably established his favorite set of apps and, when it comes to newer apps, is most likely very picky. But this doesn't mean that the number of downloaded apps is decreasing. On the contrary, we can see growth in app downloads each year, but the state of their usage may be alarming. 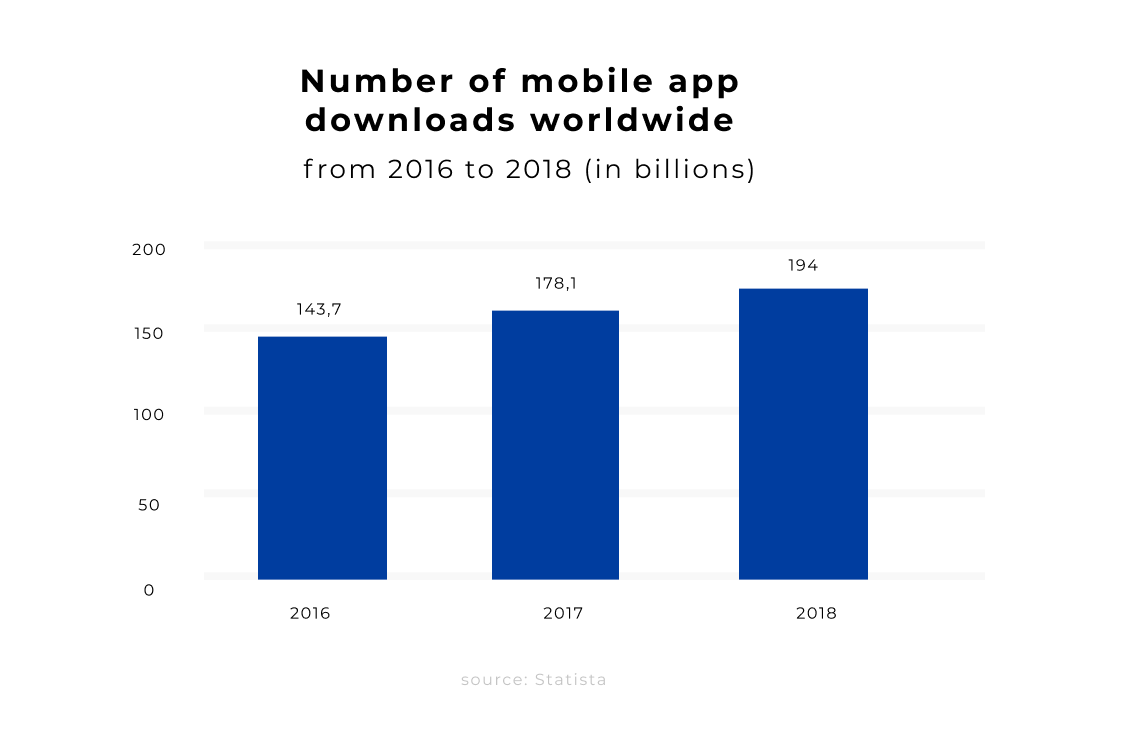 Nearly 21 percent of consumers, according to Loyalitics, abandon newly downloaded apps after just one use. It means that one in five users never relaunch an app after one session. 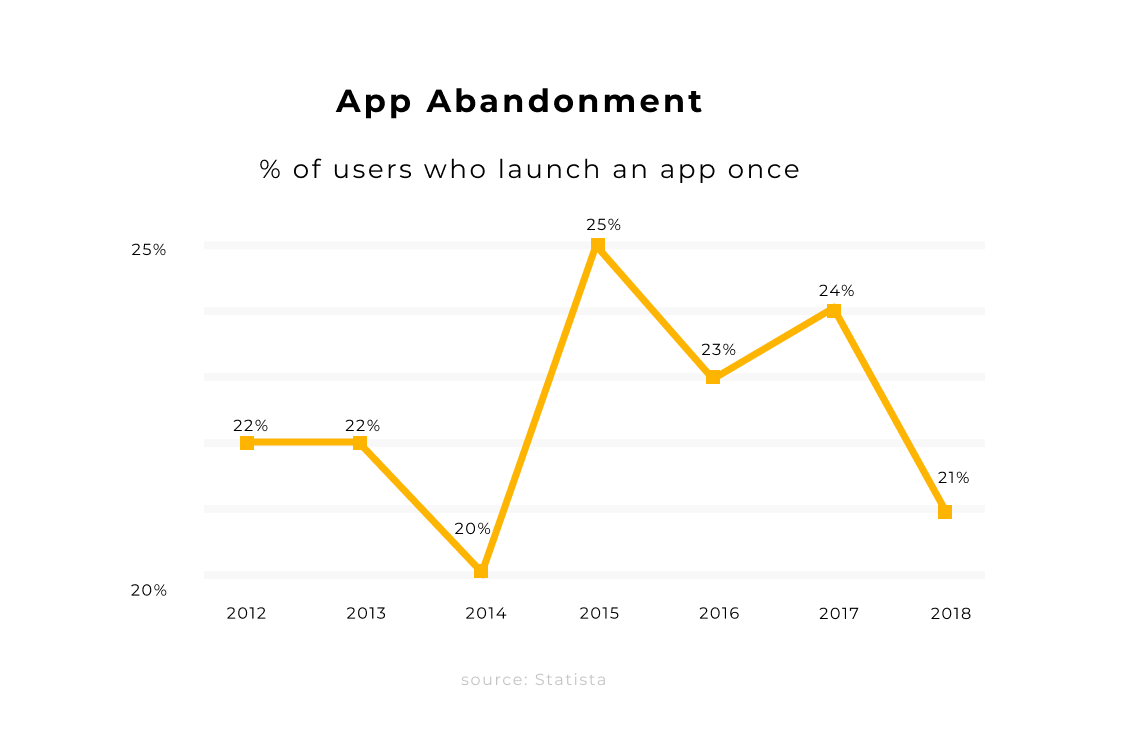 Convincing clients to install a PWA directly from a browser seems to be much simpler than forcing them to go through the app store. Not to mention that avoiding dependency on Apple and Google is a blessing for marketers who aren't aware of when, or even if, their app will be published or updated in app stores. Also, they don't have to pay any middleman for distribution, which makes the cost of user acquisition (CAC) much lower.

A Progressive Web App, on the other hand, creates an opportunity to use a shopping-like impulse. When the user sees exciting content during his digital journey, he may be more open to making a snap decision and pinning the app to the Home Screen. This works in much the same way as the various chocolates and snacks by the checkout in the supermarket.

Additionally, a PWA, with its smaller size and faster installation process, gives marketers a bigger chance of successful user onboarding (from the website to the app) and, in the end, increasing marketing ROI by decreasing the cost of development at the same time. This cost reduction is achieved because using a PWA means having only one website which is used as a regular website on desktop, a mobile website on smartphones and tablets, and as a multi platform app, so there is no need to build, test and deploy a desktop website with RWD, an Android app and an iOS app, all at the same time.

In the omnichannel era, this is crucial. PWA technology enables brands to unify and streamline their clients' experience across all touchpoints - with lower costs. Customers are willing to reward them with loyalty, especially since marketers can add native-app functionalities to PWAs like an "install the app" pop-up, a Home Screen icon for the app, and push notifications. A PWA's tools help to re-engage clients, make them more aware of the brand, and allow analyzing their preferences just like native apps.

Benefits of PWAs for businesses:

Progressive Web Apps are based on common web standards like JavaScript, CSS and HTML, and so, compared to native apps, they seem to be easy-to-build. In some, not very sophisticated, projects, it is true; a PWA can be built from scratch by an internal team of front-end developers relatively easily.

However, in the case of more complicated sites, stores, or marketplaces, it could be tricky. When a company has plenty of different systems that are linked with one another very tightly, any changes - PWAs included - need to be made with extra caution. That is the "dirty work" that rests on the shoulders of techies. They must find a way to implement the marketers' idea about seamless UX and make sure everything works. It is an issue in most eCommerce platforms, often due to old, outdated technology stacks.

However, with microservices and headless architecture, it is a breeze. The newest PWA frameworks and ready-to-use solutions enable developers to turn a site into a Progressive Web App without any interference with the eCommerce engine. They can separate the front-end from the platform’s back-end while supporting sales and marketing teams with a new, agile way of doing UX. Thanks to working with e.g. Vue Storefront, developers are building strong frontend and JavaScript competences, and gaining experience valuable in more than just eCommerce projects. Moreover, they don't have to wait an eternity to see the effects of their efforts. The time-to-market of products based on PWA frameworks is about several months, but it takes just 160 working hours to test out a fully-featured Vue Storefront proof of concept for eCommerce PWA.

Benefits of PWAs for developers: