# The history of PWA development

The term Progressive Web App was created in 2015 by Google, but the idea of putting mobile user experiences in the center of interest is not new. Besides, even Google's current definition is slightly different from the first one. To fully understand the whole concept of the PWA standard, we need to look into its roots. However, they are more in-depth than you may suspect.

# The History of Progressive Web Apps

We can look for them as early as the year 2000 with the creation of XMLHTTPRequest. This technology gave us the chance to retrieve data from a URL without having to do a full page refresh. Five years later, we get AJAX - a technique for creating better, faster, and more interactive web applications with the help of XML, HTML, CSS, and JavaScript. With AJAX, web applications can send and retrieve data from a server asynchronously (in the background) without interfering with the display and behavior of the existing page.

All these new technologies were based on some shared principles including linkability, accessibility both by humans and engines, UI richness as an addition to a functional core, and freedom to implement and distribute without any additional payments or permissions.

The idea of a PWA wasn't invented either by Google or by Apple, but it was Steve Jobs who first presented the concept in front of the world, during the iPhone introduction in 2007. At the time, it seemed natural that external apps would help to increase the popularity of that device, and Jobs wanted developers to build apps using standard web technologies.

“(...) you can write amazing Web 2.0 and Ajax apps that look exactly and behave exactly like apps on the iPhone. And these apps can integrate perfectly with iPhone services. And guess what?
There’s no SDK that you need! You’ve got everything you need if you know how to write apps using the most modern web standards to write amazing apps for the iPhone today.
So developers, we think we’ve got a very sweet story for you. You can begin building your iPhone apps today" - Steve Jobs, Apple (source).

Back then, there was no mention of the App Store, but it changed rapidly. The SDK for the iPhone was announced in October 2007, and in July 2008 Apple presented App Store. Looking back, it is pretty clear why. 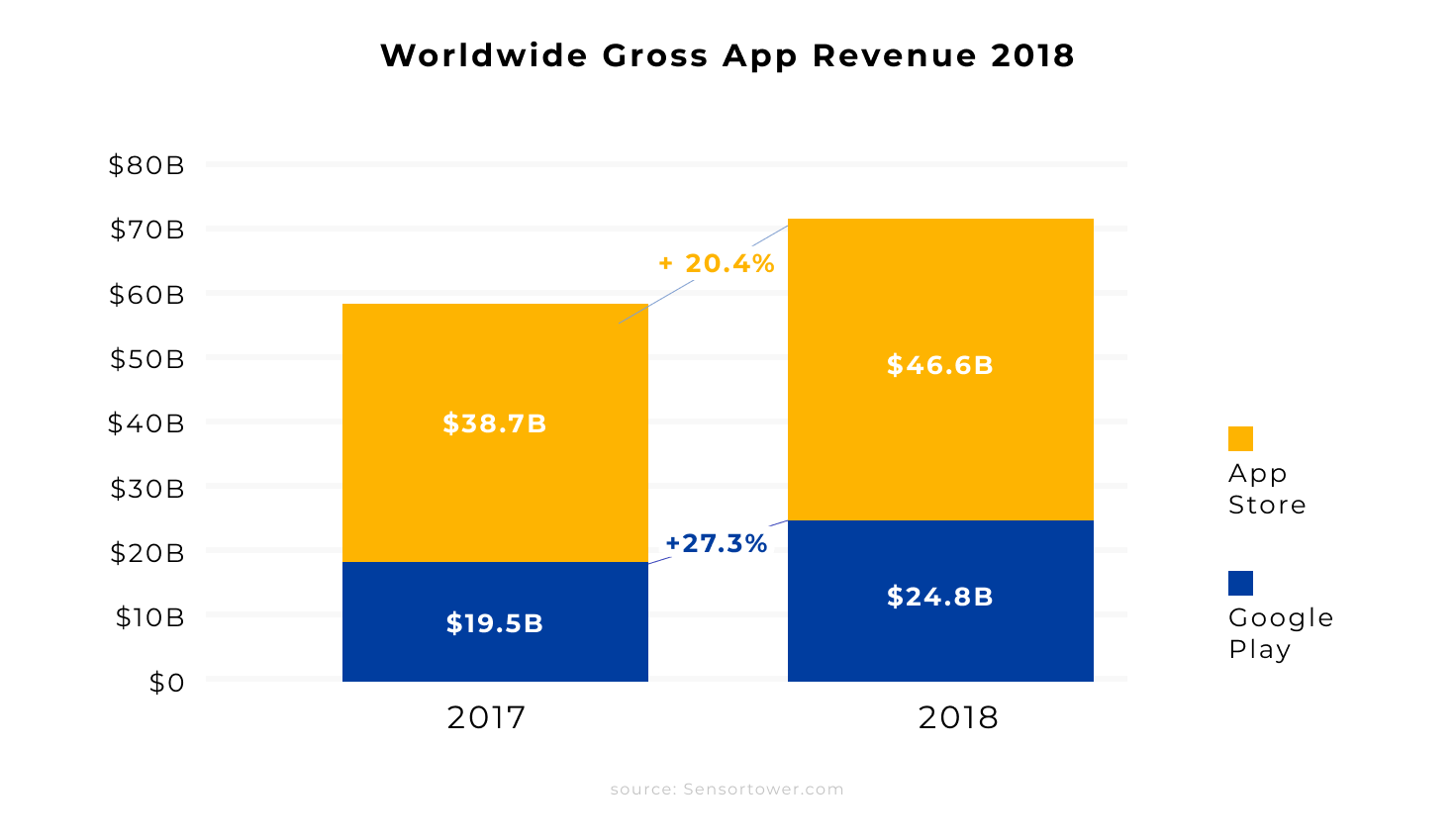 The idea of "universal apps" was frozen for almost a decade, and that time belonged to native apps that completely redesigned the way we use the internet. Native apps dominated the mobile network and helped to build Google and Apple’s power on mobile. Meanwhile, web owners, who were reluctant to plant data in their "walled gardens”, began to switch to Responsive Web Design. With this approach, web pages display correctly on a variety of devices and screen sizes by using proportion-based grids, and media queries in CSS. The PWA-specific approach had to wait for its moment.

As Alex Russell, Senior Staff Software Engineer at Google, pointed out in his text “Progressive Web Apps: Escaping Tabs Without Losing Our Soul”, published on Infrequently.org in July 2015:

"It happens on the web from time to time that powerful technologies come to exist without the benefit of marketing departments or slick packaging. They linger and grow at the peripheries, becoming old-hat to a tiny group while remaining nearly invisible to everyone else. Until someone names them." - Alex Russell, Senior Staff Software Engineer at Google

And as Frances Berriman and Alex Russell, the authors of term PWA, wrote in the foreword of “Progressive Web Apps, a book by Jason Grigsby”:

"The idea of native apps always seemed like a regression. Walled gardens with terrible search, dubious security, and the endless tax of updates - it felt so 1990s." - Frances Berriman and Alex Russell

In 2015, Berriman and Russell observed a new class of websites that were providing a better user experience than traditional web applications. All of these applications were characterized by one common feature: they gave up the browser's tabs to live on their own while maintaining their ubiquity and linkability.

# The external landscape of PWAs

After their official debut, PWAs were perceived as The Next Big Thing in the tech world but - just like it was with the "Year of Mobile" - nothing changed overnight, even when two key players made an alliance to accelerate PWA adoption. 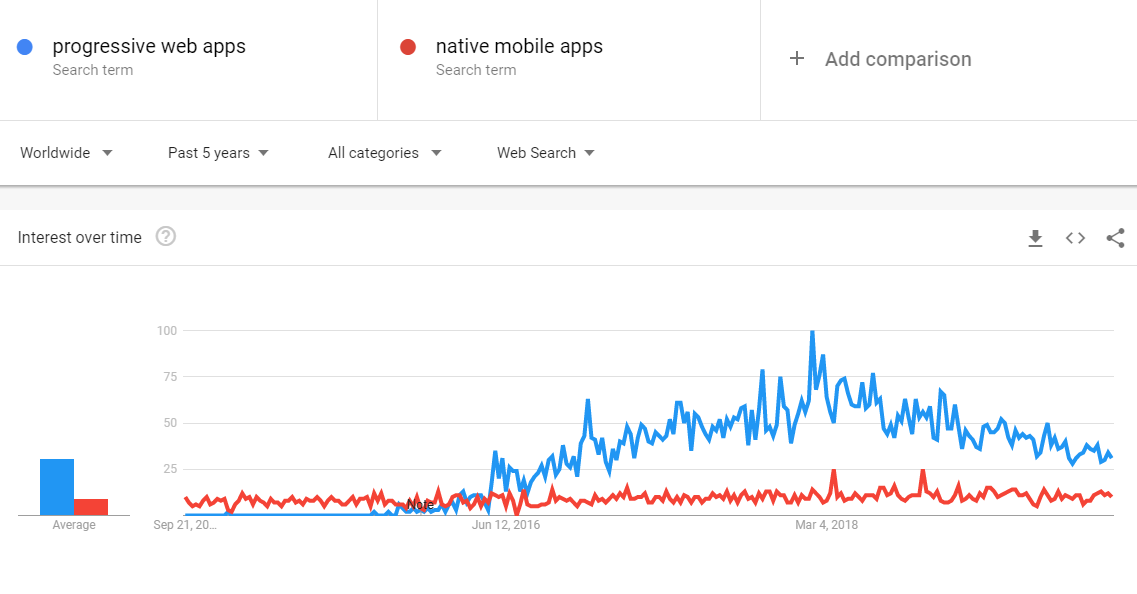 Google and Microsoft have been rivals in the technological arms race for decades, but when it came to the PWA standard, they decided to work side by side. Microsoft's decision seems especially worth noting, considering the Giant from Redmond was able to take a step back and sacrifice its idea of a Universal Windows Platform to make room for PWAs - the concept introduced by Google.

Universal Windows Platform (UWP) is an API created by Microsoft and first introduced in Windows 10. The purpose of this platform is to help develop universal apps that run on Windows 10, Windows 10 Mobile, Xbox One and HoloLens without the need to be re-written for each.

Of course, the introduction of UWP didn't succeed, which makes the choice to push PWA technology more pragmatic, but the collaboration between these kinds of forces still looks unusual. And yet, they managed to forge a partnership in developing PWA standards. Jeff Burtoft, Principal Program Manager at Microsoft, put it best when he said:

Google led the way with Progressive Web Apps, and after a long process, we decided that we needed to fully support it. 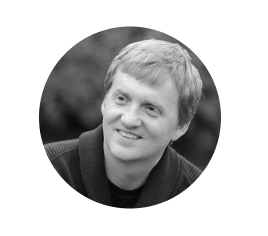 At first, PWAs started to work on Chrome OS, Android, and Windows. Now, developers can also publish them on Microsoft Store, which may seem to be harking back to the old “native app” approach a bit.

What about Apple? It didn't rush. The support for key PWA technology called “Service Workers” was introduced by Apple in 2018, but it came with a severe limitation, e.g., there was no support for push notifications.

How will the future of Progressive Web Apps look? Jump to another chapter to learn more about PWAs in the mobile first world.

←1. Introduction to Progressive Web Apps 3. PWA in the mobile-first world→